Texas weather in February these past two years has been nuts!  Last year we had a really bad hail storm and this year, it seems to have attempted to repeat itself.   It is not often that we have to divert (last minute change of plans), but I suppose if we were going to divert, it would be fitting to have a complicated dramatic story to go with it...here it goes!

We frequently go on day trips, and Sunday was no different.  Since we fly VFR most of our flights we are glued to weather forecasts and radar pictures.  A storm was slated to start rolling in around 9 pm so we thought we would be just fine going out to Aransas Pass and coming home.  This is one of those trips that we do often.  The original plan was to spend the night at the new hotel that Aransas just got, but a hail storm was headed for AP that night, so there was no way we were leaving the plane out to brave the forecasted hail.  Returning home looked like a very doable feat, especially since we were in the twin. 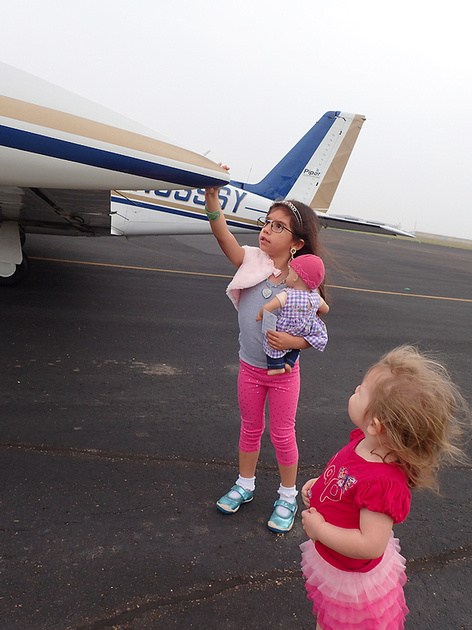 Pre-Flight Walk Around...Toddler editionTeach 'em young the importance of the walk around. I will also add that Katherine doesn't wear glasses. She's going through this "I have to accessorize as much as possible" phase. The more accessories she wears the more "stylish" she is.

The flight from our house to Aransas is about an hour and 20 mins, give or take.  We had to make a stop in Uvalde for some gas and then continued on our way.  There was quite the turbulence too...we stayed low at about 1500ft because Juliana had a double ear infection that she was 5 days into taking antibiotics for, so we wanted to play it safe there.

Fueling up in Uvalde

Just like a hawk, weather watch was on upon landing.  We decided that we needed to leave Aransas no later than 4:30pm to make it home in plenty of time to put the plane, vehicles and toys away in time for the storm.   All is good until we actually get airborne.  The weather built quickly and before we knew it we were faced with making some divert plans.  This wasn't the first time we had ever had to divert for weather, but it was the first time with kids.  Let's just say that Sunday is the WORST possible day to have to divert anywhere. 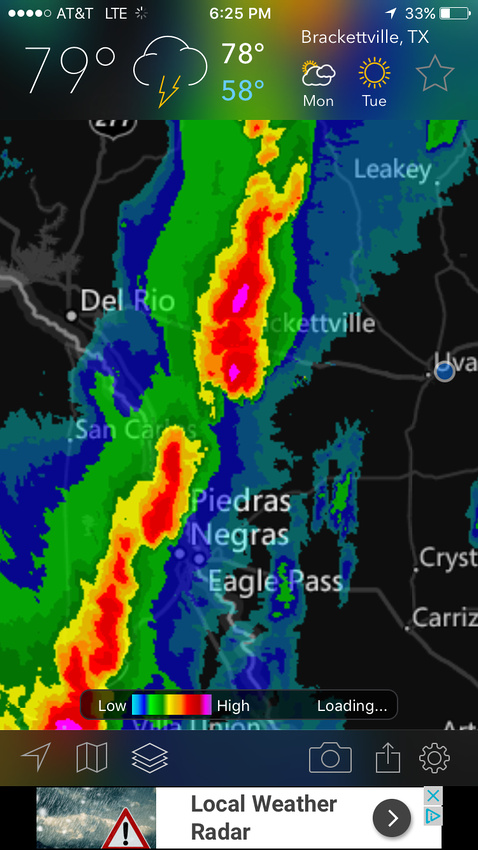 The storm had literally settled over our airfield, so we landed in Uvalde with hopes of getting a hangar for the plane and a rental car to just drive home.  Zero luck with either.  Oh and it's also dinner time now...kids are hungry, just great.  After about 20 mins on the ground, we decide to fly to San Antonio, hangar the plane at International and then get a rental there to drive home.  Dinner, we would get that on the way.

That radar was still looking terrible, and the weather was starting to move East - towards us...just fabulous.  ...and now, we are also night flying.  A first all together as a family in the twin for us, a first-ever for the girls, and the first time in 5 years for me since moving to Texas. By this time, we are just dreading the 2 hour drive home, because we really don't like to drive if we don't have to.  The girls complained the whole 25 min flight to San Antonio.  I forgot how cool it was to fly at night. You literally have to identify everything by lights. 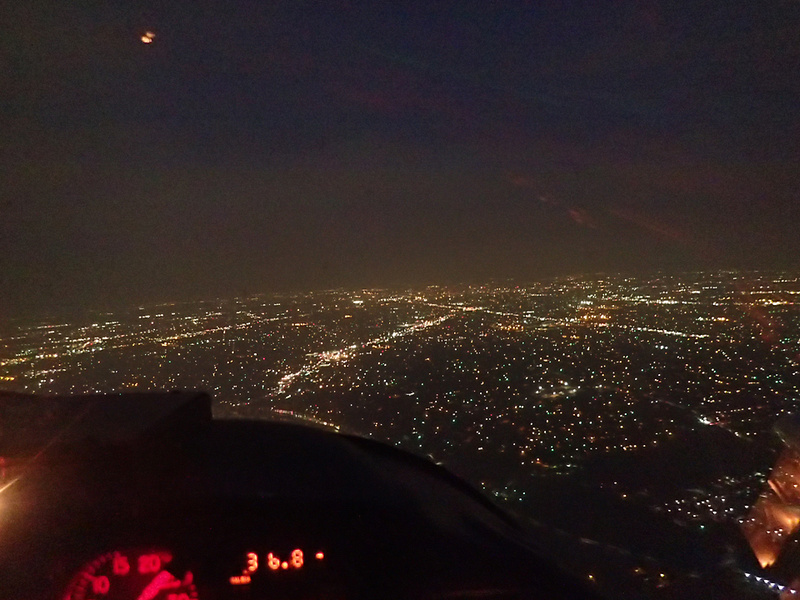 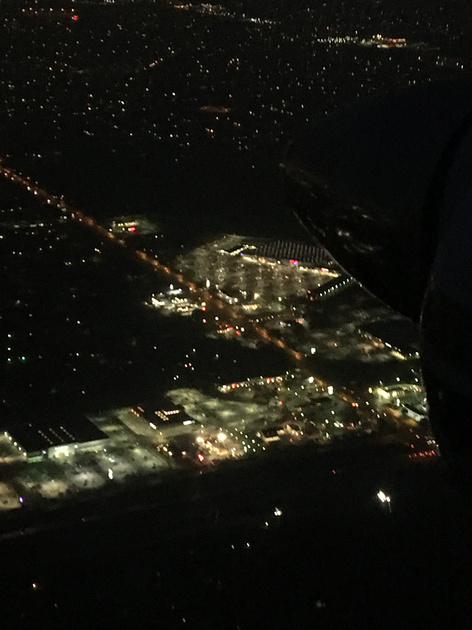 Every Texan knows how to spot an HEB from a mile (or 1500 ft in our case) away!Can you see the HEB?!

As we were coming in on final at San Antonio International Airport, a Southwest jet was waiting to take off.  Fun...entertainment for the girls! 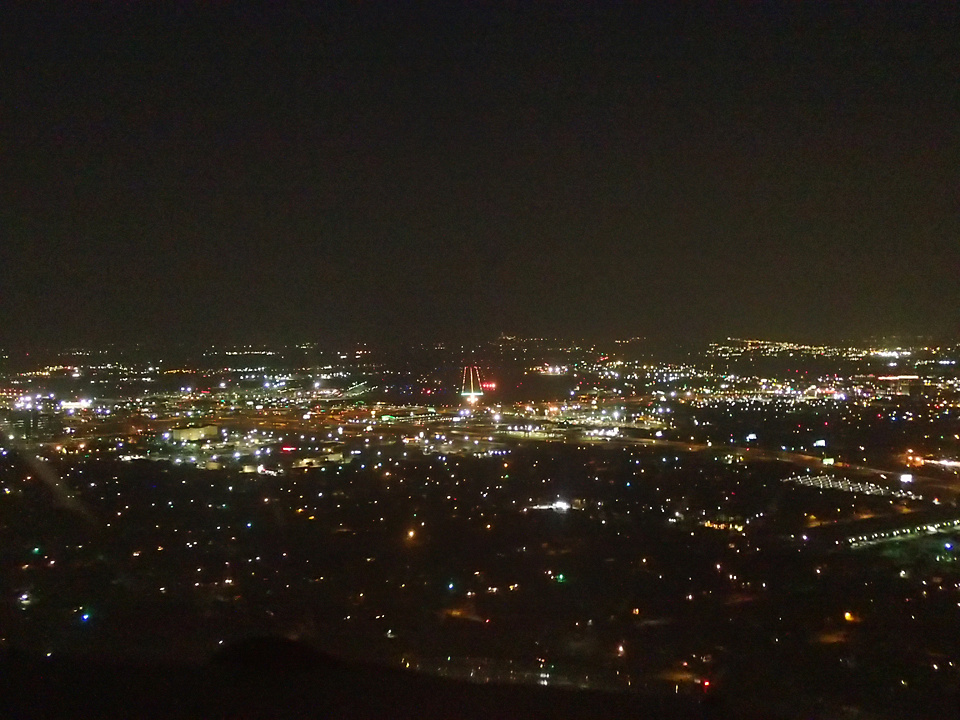 While we were waiting for clearance to cross the runway, we got to see an upclose night time departure from American Airlines.  Shout out to all of our Southwest and American Airlines pilot friends! 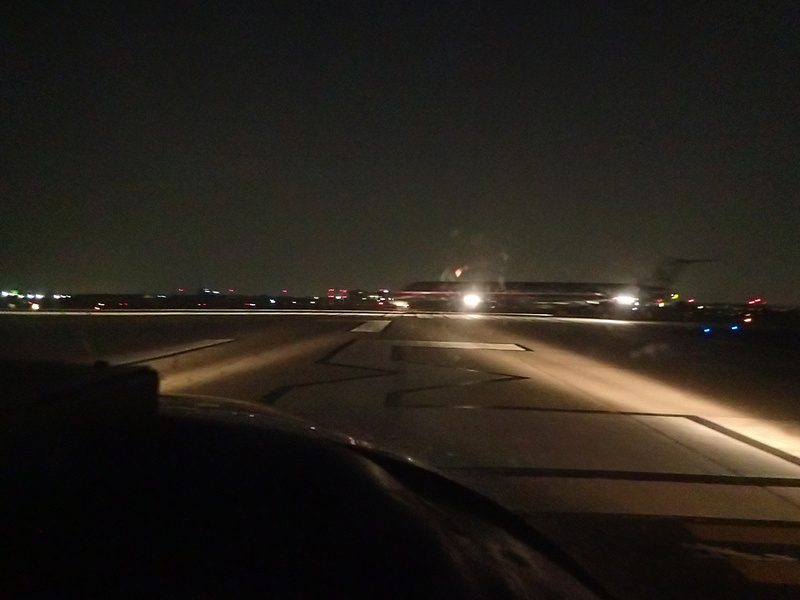 American Airlines flight that we had to wait for to cross the active runway.

We chose to park at Million Air FBO because we had heard some good things about them, and boy were we happy with that decision.  Prior to taking off from Uvalde, I had called them to inquire about their hangar space, rental car availability and let them know we were inbound.  When we landed, they had our car ready, linemen attending to the plane and a display cabinet full of bribe worthy toys to keep two tired toddlers from having meltdowns.  The staff was excellent.  The twin even wound up getting a detail job too. 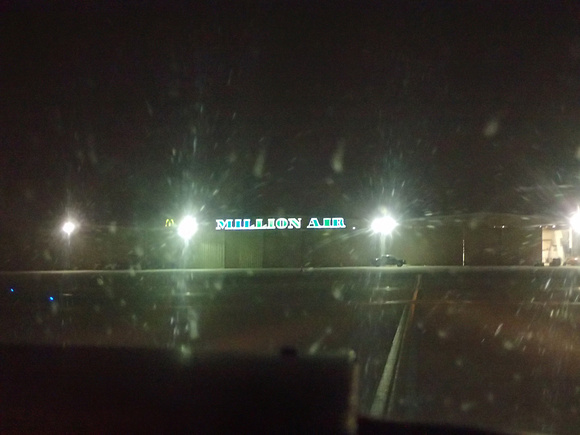 Concern over the plane quickly went away and the new issue was at front and center...getting home.  We had a rental car, thankfully we had both car seats. Yeti doesn't particularly care for driving in San Antonio, and I don't mind it, so we made an agreement that I would get us out of SA and he would take over driving once we got back to Uvalde, because that is where we would meet the weather.  HAHAHA...as if!!

I drive us out of town and through the first two small towns.  We were about 25 miles away from Uvalde when out of no where it starts pouring rain.  The good news was that the girls were fast asleep - it was only an hour and a half past their bedtimes - and stayed asleep until we got home.  Thunder and lightning were the only way that I could see where I was on the road because there was no power anymore in the towns.  Driving 20 miles/hour in the pouring rain with a crazy 35 mph + wind factor is alot of fun.  Nothing beats traveling white reflective light in the middle of the road by white reflective light.  That is literally all I could see.  The 10 mile stretch of storm felt like 10 hours.  But we made it.

The following 45 mins were spent driving cautiously (and slowly) through spurts of rain until we got to Uvalde, where there was no more weather.  It was also conveniently when Yeti got to take over driving.  I'm certain there are imprints of my hands still in the steering wheel.  After an insanely long day of travel, we were home at 10:35pm.  We made it in time to turn on the tail end of the news and see that a tornado was forming in San Antonio!  SO thankful we got the plane in a hangar!! Oh and for a bonus, the plane was washed and detailed!

The next day, Yeti retrieved the plane successfully and fought a 30 mph headwind the whole way home. 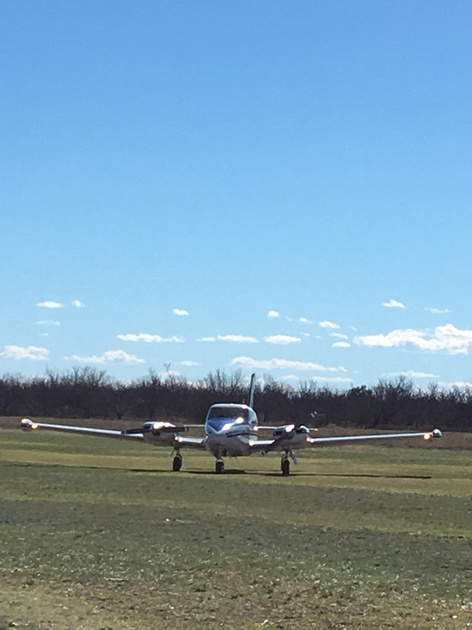 Until the next adventure!