I was fortunate enough to be part of a centennial celebration over the past few days for our squadron, the 87th Red Bulls, at Laughlin Air Force Base.  We have been assigned (and attached) to this squadron for almost 6 years.

My husband was responsible for an aerial photoshoot, which included him flying a T-38 with a combat camera Airman in the back seat. Learn more about what combat camera does here... Combat Camera - What We Do.  They had a plan to get an image with a 4-ship of T-38s near Amistad Lake, as well as over Laughlin Air Force Base and lastly, John Wayne's Alamo Village.

I contacted my friends at Alamo Village to see if it would be possible to posture out there and take ground imagery.  They were very accommodating and happy to join the squadron celebration in this capacity.

It's not every day that a squadron turns 100, so being able to capture this momentous occasion was such an honor.

Enjoy a couple of my favorite images...

This first image is of the photo being framed.  The T-38 in front (far left) is piloted by my handsome husband who had the combat cameraman in his back seat.  My husband is directing the other 4 T-38s into an echelon formation for the aerial photo.   You can check out the imagery from combat camera here... Official Laughlin AFB Red Bull Birthday Photos

The formation did a low pass over the Alamo replica at approximately 1,000 ft AGL.   Standing at the face of John Wayne's Alamo the jets looked amazing! 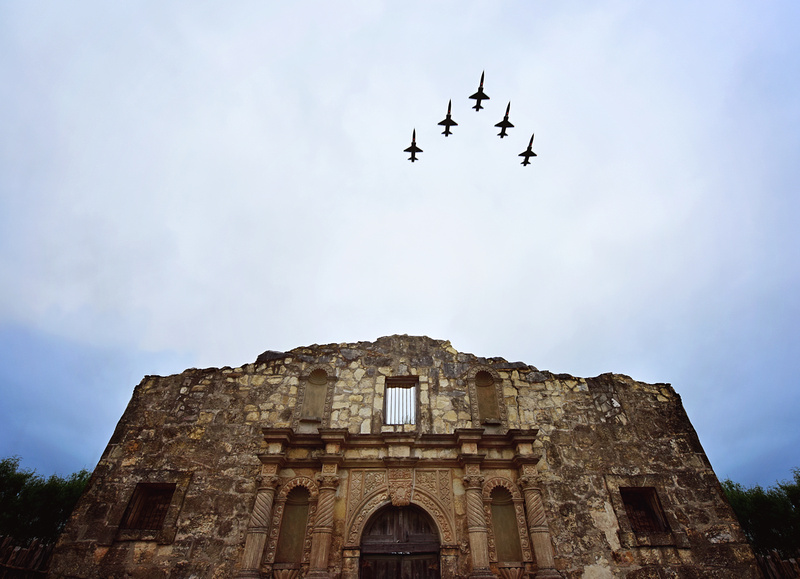 As an Air Force veteran, spouse of an Air Force pilot and all around aviation addict, this is one of those events that will forever be cemented in my heart.

In honor of the celebration, the squadron's lead jet donned special heritage noseart and tailflash art commemorating the 100th anniversary, dating back to the WWII mission that the squadron supported.  Now, the squadron's mission is to train the next generation of fighter and bomber pilots who join the Combat Air Force - they shape the spear that gets sharpened by the major weapon system these new pilots are selected to fly.  Of course my girls didn't turn away at the chance to get in their flight suits and join the celebration.  Happy Birthday Red Bulls!